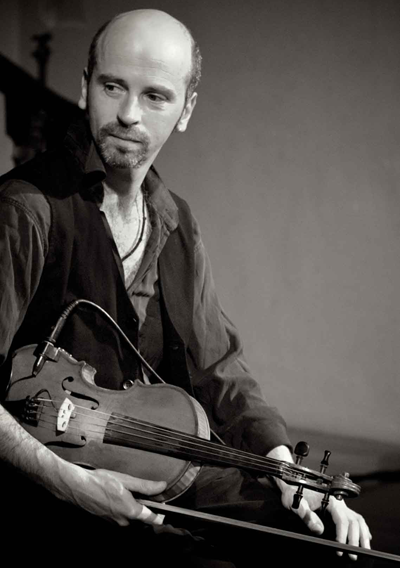 was born in Edinburgh and brought up in a family that was full of traditional music. He was taught traditional fiddle by Alistair Hardie, Davy Tulloch, Angus Grant and Tom Anderson, and classical by Michael Rigg. As a performer he has played at hundreds of festivals, concerts, theatres and dances across the UK, Europe, North America, Asia, Australia and Africa. Bands he plays/ has played/ recorded with include JOURNEYMAN (focusing on his original material); Iron Horse; Cantrip; Burach; a successful fiddle duo with Jonny Hardie which released the albums Up in the Air and The Blue Lamp. As a session musician he has performed/ recorded with The Unusual Suspects, Session A9, Wolfstone, Arz Nevez (BRZ), Malinky, Leo McCann, Old Blind Dogs, Annie Grace Band, Jimi Shandrix Experience, Stevie Lawrence, RSNO, and Sogdiana (UZB) amongst others. He is a prolific and enthusiastic composer of tunes and has been greatly inspired by musicians and cultures he has met on his travels. As well as recording some of these tunes with his own projects, some of them have been recorded by other musicians like Marie Fielding, Old Blind Dogs, Dochas, Liz Docherty and Give Way. He has written for TV, radio and theatre: with the Traverse in Edinburgh his work includes the music for Outlying Islands, Heritage and Faith Healer. He has also worked with NTS in Gobbo and the Watchmaker, with Licketyspit in their production of MOLLY WHUPPIE and with Dogstar in THE TAILOR OF INVERNESS. His new album 'The Long Road and the Far Horizons' (a double CD of original material)is out now. He appeared at Celtic Connections 2017 with Shooglenifty.

Up in the Air

The wind shall blow for evermore

Voice of the Land